End of an era for Issues in Society 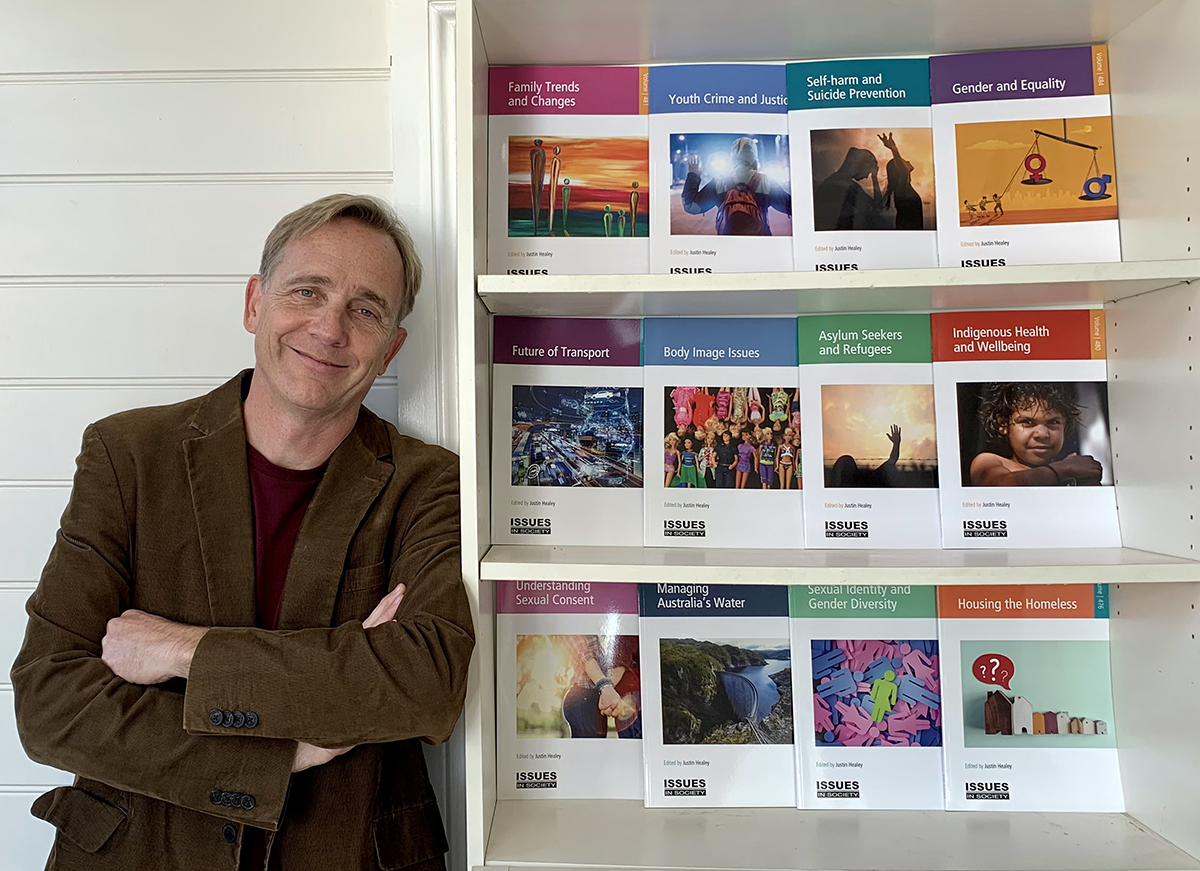 As published on the SCIS Edublog

Justin Healey reflects on editing and publishing the Issues in Society series, after recently announcing the impending closure of The Spinney Press.

In late May this year, The Spinney Press released its final print and digital editions in the popular Issues in Society resource series after 30 years and 484 volumes.

Volumes 479-484 are the last six titles in the series and represent some core topics of concern over the years: Asylum Seekers and Refugees, Indigenous Health and Wellbeing, Family Trends and Changes, Youth Crime and Justice, Self-harm and Suicide Prevention, and Gender and Equality.

In recent days, I have been overwhelmed by kind farewell email messages from school librarians, some of whom have supported the series since it began in 1992, when it was rather short-sightedly called Issues for the Nineties! (The series became Issues in Society in 1998.)

The publishing business is in the process of gradually closing down, due to family reasons. Chief among them is the need to care more for my delightful teenage daughter who lives with complex disability and health issues.

It has been an honour and a privilege to produce the Issues in Society series for so long – initially in tandem with my mother Kaye Healey as editor for 8 years, then myself as editor/publisher for the last 22 years along with the invaluable expertise of a small team of long-term colleagues.

Issues in Society has long enjoyed loyal and trusted subscriber support from secondary schools around Australia. When Digital Editions were introduced back in 2011, schools embraced them with enthusiasm. The pairing of print and ebook editions ensured that anyone in a school could have easy and affordable access to our issues.

As you may already know, every Issues in Society title consists of a thoroughly researched compilation of the best available content on current social issues topics. I must acknowledge the thousands of contributors to our books over three decades, who all gave permission to reproduce their works in our resources. To our authors from the media, government and non-government organisations, lobby groups, academia, and to our creative cartoonists, we salute you!

I have explored an immensely diverse array of topics: perennial debates on voluntary euthanasia and drug law reform; the cumulative consequences of climate change; human rights concerns such as racism and Australia’s treatment of refugees; contemporary concerns like our nation’s relations with China; sexual consent and harassment; and the ethics of new technologies such as artificial intelligence. The list of fascinating topics is indeed long.

I have been asked over the years what has made The Spinney Press such a long-term independent presence in the educational publishing industry. I think it really comes down to having established a unique niche by covering current topics which traverse school curricula and fill the gaps in many a syllabus. And we have been nothing if not current, curious and consistent!

I feel a great sense of pride at the sustained relevance and longevity of the Issues in Society series. And I feel satisfied that so many school libraries will still be able to engage their readers with their legacy collection of titles which will continue to provide an overview on issues in our society for years to come.

The Spinney Press will continue to trade over the next 6 months and offer customer sales support for all backlist Issues in Society print and Digital Editions – via email and online.